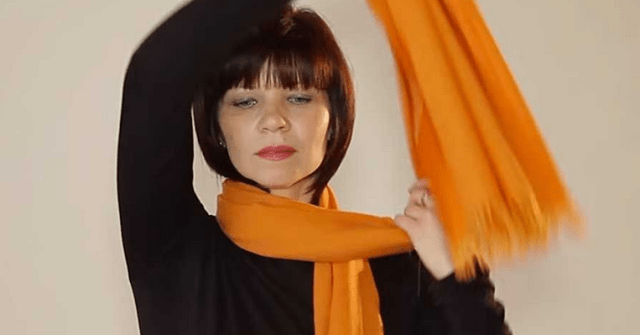 This is probably the easiest way to tie a scarf ever possible. All you need to do is drape the scarf evenly around your neck and then simply let it hang. As easy as an A B C…, isn’t it?

This is another of the list of the easiest ways to tie a scarf. For it, you will need an extra accessory: your belt. Again, simply drape the scarf evenly around your neck and let it hang as done in the basic drape way. Then, take the belt and fasten it over the scarf at the waist area. You will this way create a sexier look of the scarf and your body, as you will accentuate the waist using the belt.

Here is definitely one of the ways to tie a scarf that most of us practice every day. It not only gives you a charming look but also keeps you warm when the temperatures begin to drop low. To get the look all you need to do is to drape the scarf evenly around your neck. Then take one of the ends of the scarf and toss it over the opposite shoulder. Voila, done! This is one of the ways to tie a scarf that you will definitely adore. It is a way to create a front tie from your scarf. In order to achieve the look, drape the scarf evenly around the neck. Let it hand simply. Then, cross both ends of the scarf and tie them in the center. Adjust them so that one of the ends is layered over the other one and fluff.

Here is another of those simple ways to tie a scarf that we have always pleasantly worn. To get this look, again drape the scarf around your neck. This time do it unevenly, making the short end hit the chest area. Then, loop the longer end around your neck twice. Finally, let it hang. Done!

This is another way to tie a scarf that you will love to try. It is a continuation of the previously presented basic loop way to tie a scarf. As in the steps presented above, you need to first drape the scarf unevenly around your neck. Again, let the shorter end hit the chest area. Then, loop the longer one around your neck twice. Let it hang. Finally, jauntily tie the two ends off to the side.

If you are looking for some creative ways to tie a loop then the pretzel one must be on your to-try list. To get this look, first, fold the scarf in half. Then, drape it around your neck. Now, feed the top end through the loop. Finally, take the bottom end and bring it over and through the same loop. Voila, this is a super easy and at the same time super creative way to wear your scarf.

Here is another of the super easy ways to tie a scarf that you need to try. First, spread the scarf fabric out. Then, drape it over your head. Now, toss one of the ends over one of your shoulders. Then, throw the remaining end of the scarf across the other remaining shoulder.

Creating figure 8 is one of the most creative ways to tie a scarf. To get the look, first, fold the scarf in half and then drape it around your neck. Now, feed the top end through the loop and twist the loop to create the second hole of the 8. Feed the bottom end through the second hole and adjust accordingly so that you get a perfect looking 8 effect.

Here is another creative way to tie a scarf. To get the faux infinity look, first, knot the two opposite corners of the scarf together to create a circle. Then, swing it over the head twice. Keep the knot at the back.