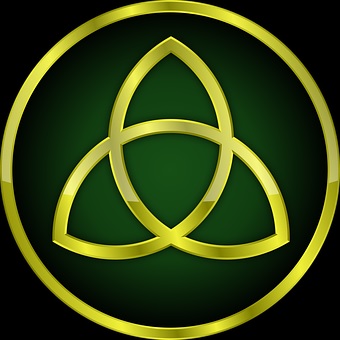 What Does a Celtic Trinity Knot Mean?

The Celtic trinity knot has intrigued people for centuries as they try to unravel its lines’ meaning and interlocking points. The result has been a variety of interpretations that include love and family relations, or maybe it is a symbol to mark important events and emblematic beliefs held by families.

The knot’s design can be traced back to early Christians who used it as a symbolic representation of the Holy Trinity. There is even a legend associated with it that speaks about St. Patrick using it to explain the Holy Trinity’s meaning. Each section of the knot represents God, the Holy Spirit, and Jesus. The circle that surrounds it is interpreted as the representation of eternal life.

Meaning of the Celtic Trinity Knot

In ancient times, the Celtic Trinity knot was frequently used to represent the idea of Mother, Maiden, and Crone, a triple neo-pagan goddess. Also, meaning has been attributed to its three petals connected with the phases of the moon. In more recent times, as Christian missionaries started coming to the area, the meaning of this Celtic knot was acknowledged to represent the Christian Holy Trinity. The Father, the Son, and the Holy Spirit found a space in each of the sections of the Celtic knot because they are interlaced, and its lines are unbroken and can be understood to stand for spiritual growth, undying love, and eternal life.

When the Celtic Trinity knot’s association with Christianity and its symbols is set aside, much meaning has also been attributed to the Celts’ own beliefs. They believed in the utmost importance of three elements which are Sky, Sea, and Earth. And also, in the fact that the three areas of the knot are representations of the moon’s phases since so many Celtic symbols are either solar or lunar.

The Trinity Knot has been repeated over and over all across Ireland to the point where nowadays it can be found in monuments standing even in the remotest locations.

The Celtic Trinity Knot’s association with love has become the ideal element in so many unique Celtic knotwork jewelry pieces. Wearers know that this is an ancient, beautiful, and revered Celtic symbol that is an integral part of Irish folklore and legend. As a readily identifiable Irish symbol, today’s designs may include depictions in different types of metal, and colorful stones have been strategically added to create irreplaceable rings, necklaces, bracelets, earrings, and more.

People fall in love with the Celtic Trinity knot and its association with many eras of history because they know that when it is incorporated into jewelry, it brings an element that has stood the test of time for centuries. Its popularity is so incomparable that it continues to be an integral part of many jewelry collections. Its eye-catching design, with its three interlocking shapes, gives it a particular recognition that never seems to go out of style. When used in necklaces, it can be surrounded by a heart to add an additional symbol of love. When used in a ring, it can combine the colors of different metals with stones added to give even more character to the piece.

How to Choose a Beautiful Evening Dress